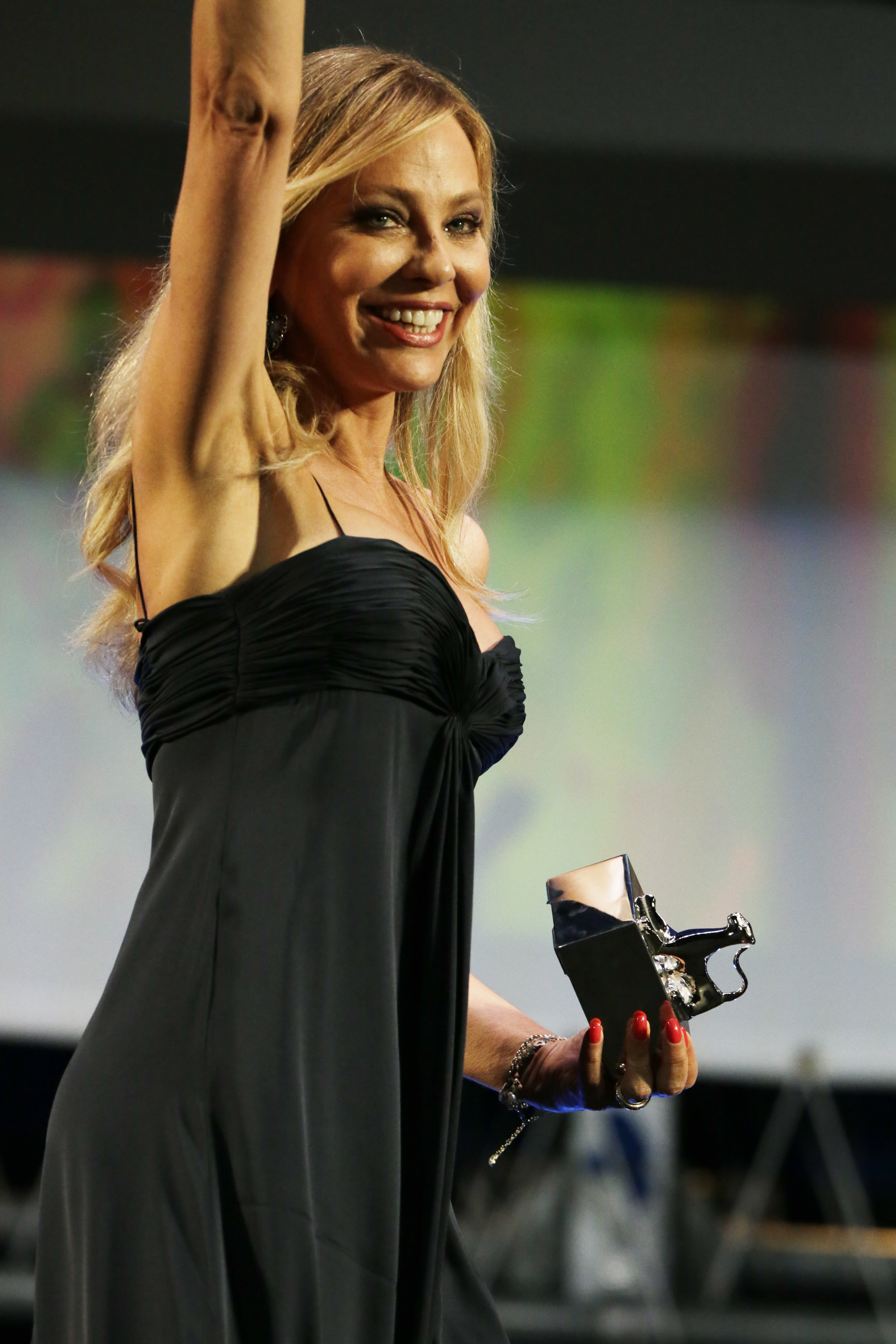 Of all the Italian actresses of her generation, Ornella Muti is undeniably the one who brought something new, a “gentle revolution”, to the status of a star. Ornella Muti belongs to a “non-legendary” era of Italian cinema. In contrast to the silent film “divas”, the sophisticated stars of the Fascist era “white telephone films”, unlike Anna Magnani and Néo-Réalism, Sophia Loren and the post-war comedies, Monica Vitti in her work with Antonioni, Claudia Cardinale and the great auteurs of the 60s, Ornella Muti did not benefit, or at least benefited less, from the formidable creative impetus of Italian cinema. Indeed, she made her first film in 1970, a date that represents the start of the decline in Italian production, following two decades of artistic supremacy. Yet, like Bardot in her time, Ornella Muti, with her juvenile eroticism, that insolent and placid grace, an indolence that might be taken for laziness, was soon to distinguish herself from the numerous soon to be forgotten starlets and naked young actresses featuring in throwaway popular films. Granted, her breath-taking beauty might well have contributed to her rapid and growing popularity with international audiences. But the actress’s choices also played their part. And nor was the interest some major directors, and particularly Marco Ferreri, took in her, pure coincidence. And it is really about time to recognise Ornella Muti’s gift for shaking off the cliché of the femme fatale or the Italian beauty, to succeed every step of the way, in both her life and career, in roles that were surprising and closer to her aspirations. Ornella Muti made her screen début at the age of fifteen, playing the lead in The Most Beautiful Wife (La moglie più bella, a wonderfully apt title in the original), a Sicilian drama for which the director Damiano Damiani gave this young Roman, Francesca Romana Rivelli, her professional name. These stunning beginnings took a few years to turn into a real career. A hostage to her age and astonishing beauty, Ornella Muti featured in several B more, or less, erotic and mediocre B movies in Italy and Spain, had a part in a brilliant Mario Monicelli comédie with Ugo Tognazzi (Come Home and Meet My Wife – Romanzo popolare, 1974) and two years later in an instant classic of modern cinema that inaugurated a collaboration with the iconoclastic Marco Ferreri: The Last Woman /La Dernière Femme. In this Ornella Muti played Valérie, a nursery nurse, the young mistress of a single father (Gérard Depardieu) who, after a violent row, prefers to cut off his penis rather than suffer another abandonment. In a despairing film at the heart of the era’s interrogation of male chauvinism and feminism, the crisis of coupledom and human relationships in general, Ornella Muti embodied Ferreri’s cherished idea of the female, simultaneously maternal, castrating and a whore, triumphing over the male, after centuries of submission. Her obvious beauty, but also her performance and her physical presence cannot have failed to appeal to Ferreri, a filmmaker far too long accused of misogyny but who sees himself as more of a cynical moralist. Numerous actresses (including Annie Girardot, Marina Vlady) owe their best roles to him, but one has the impression that working with Ornella Muti was as decisive for the filmmaker as it was for the actress. Ferreri was just waiting for Muti, with her perverse innocence, domestic animality, that enigmatic presence. Radically anti the consumer society, and its consumption of images, Ferreri’s films record the modes of their era all the better to lampoon them. Averse to fashions in thought, hostile to intellectuals, Ferreri has, however, never stopped making political films. But, as with the Straubs, Ferreri’s anti-fascism conveys this directly through the subjects of his films, not via speechifying. The conclusion to their work together, another masterpiece which Ornella Muti agreed to make when she was pregnant (and has never looked more beautiful), The Future is Woman (Il futuro è donna, 1984) is another of the director’s great programmatic films. A utopian story (less negative than usual) about love and maternity, The Future is Woman sets out the basis for a new society emancipated from social and family regulations, in which real ties would no longer be those of blood, but those of the heart. A couple of Bohemian intellectuals adopt an abandoned young woman who is expecting a child. The sublime coincidence of the actress’s condition and that of her character adds to the emotional  impact of this major work of 80s Italian cinema.

In between these two films Ferreri and Ornella Muti worked together in Los Angeles on Tales of Ordinary Madness (Storie di ordinaria follia, 1981), an adaptation of Charles Bukowski in which Ben Gazzara (see the documentary tribute to him, shown as a world première during the festival, and Otto Preminger’s Anatomy of a Murder) plays a skidrow poet and the actress plays Cass, a prostitute who will end up cutting her throat after severely mutilating her beauty. For the first time, one has the feeling that Ornella Muti is creating a performance, creating a character far removed from her own. The role of Cass undoubtedly remains her finest work as an actress, in which she abandons the vital energy, the untroubling sensuality that characterises her, to inhabit the character of a woman who is sick, morbid and disturbing. A year earlier, Ornella Muti had had an altogether different kind of role, as the intergalactic (and nymphomaniac) princess in Flash Gordon, a sci-fi extravaganza produced by Dino De Laurentiis and directed by Mike Hodges in which the actress sashays around in the most unlikely costumes and settings that constitute a treasury of shiny vulgarity, and deploys an uninhibited sensuality,while making fun of this image of sexual fantasy with that indifference which is hers alone, and that excludes any knowing looks at the viewer. Way beyond good or bad taste, a real guilty pleasure and cinematic wet dream, Flash Gordon is a must for erotomaniacs and deviant cinéphiles.

In Italy, her second key collaboration after that with Ferreri was with Dino Risi. In the 70s, when the work of the master of Italian comedy was becoming increasingly melancholic and nihilistic, Ornella Muti fitted Risi’s need for the character of a young woman clueless, on the skids,  insensitive and manipulative, symptomatic of the lack of sympathy Risi felt for the younger generation. In First Love (Primo amore, 1878), a variation on the The Blue Angel, Ornella Muti plays a young woman who seduces an ageing roué (Ugo Tognazzi) then abandons him to crumble in his old age, and in The Bishop’s Bedroom (La stanza del vescovo, 1977) she is the wife of the same Tognazzi, tempted by an adventure with Patrick Dewaere. In Viva Italia ! The New Monsters (I nuovi mostri, 1977), she appears in a famous sketch (“Histoire sans parole”) as the ultimate heterosexual cliché: the sexy and sexually available air-hostess. Admittedly the films offer a reductive and even negative vision of Ornella Muti, tinged with misogyny, but they remain no less remarkable films in the body of work of a director whose scathing humour increasingly failed to disguise his pessimism and bitter sentimentality.

In the 80s, at a time of crisis in Italian cinema, Ornella Muti starred in two prestigious productions, both adaptations of literary classics, which suffered from a degree of academicism: Francesco Rosi’s Chronicle of a Death Foretold (Cronaca di una morte annunciata, 1987) based on Garcia Marquez and Volker Schlöndorff’s Swann in Love (1984) in which she plays a convincing Odette to Jeremy Irons’ Swann and Alain Delon’s Charlus; she had previously worked with the latter in the French thriller directed by Georges Lautner, Mort d’un pourri (The Twisted Detective) in 1977.

Another literary adaptation, this time of John Fante, gave her a strong role as a mother (Dominique Deruddere’s Wait until Spring, Bandini, 1989), although the passage of time seemed to have left no mark on her, yet she had to abandon the sexy and stfereotyped rôles she had been offered so regularly since her debuts in commercial Italian cinema. Among the numerous light comedies Ornella Muti made (with Adriano Celentano, Paolo Villaggio and Carlo Verdone), stand-outs include Nessuno è perfetto (1981) a fantasy about sexual difference by the specialist in that area, Pasquale Festa Campanile (a filmmaker who urgently requires re-assessment), in which a colourless man (Renato Pozzetto) discovers that his sublime wife is a former German parachutist who decided to change sex in Sweden.

Ornella Muti made another film with Festa Campanile and Renato Pozzetto (to whom we are also paying tribute in Locarno this year), Un povero ricco (Rich and Poor 1983). In a far more dramatic register, Festa Campanile gave Ornella Muti a fine role in The Girl from Trieste (La ragazza di Trieste, 1981), another film about madness in which she partnered again with Ben Gazzara, with whom she had previously featured in Tales of Ordinary Madness.

In the 90s, a pleasant surprise in the trajectory of a woman and actress always on the move, the actress’s career got a new lease of life in France. At a time when she had just been voted the most beautiful woman in the world by an American magazine, Ornella Muti began moving in the world of auteur cinema with as much incredible ease  as she had in commercial films. She featured alongside Jean-Pierre Léaud for the second time in Pour rire ! (1996) by Lucas Belvaux (and subsequently in his trilogy, as one half of a formidable couple with François Morel), in Valeria Sarmiento’s L’Inconnu de Strasbourg (1998), on television alongside Gérard Depardieu in Josée Dayan’s Le Comte de Monte Cristo (1999) and in popular comedies such as Jet Set, People and Les Bronzés 3 : amis pour la vie (Friends Forever More), the French equivalent of the Italian « ciné-panettone ». In 2004 she appeared in Asia Argento’s second film, le Livre de Jérémie (The Heart Is Deceitful Above All Things). What could be more natural than the getting together of those two women, both beautiful, provocative, sensual, absolutely Latin, in short, completely emancipated? In 2012 Ornella Muti featured in the film Woody Allen shot in Rome, To Rome With Love as part of a distinguished international cast.

It is an enormous pleasure to welcome Ornella Muti to the stage on the Piazza Grande tonight. Tomorrow afternoon, the festival audience will have an opportunity to attend a conversation with the Italian actress at the Forum.